Why Team Matchmaking is the Opposite of Team-making 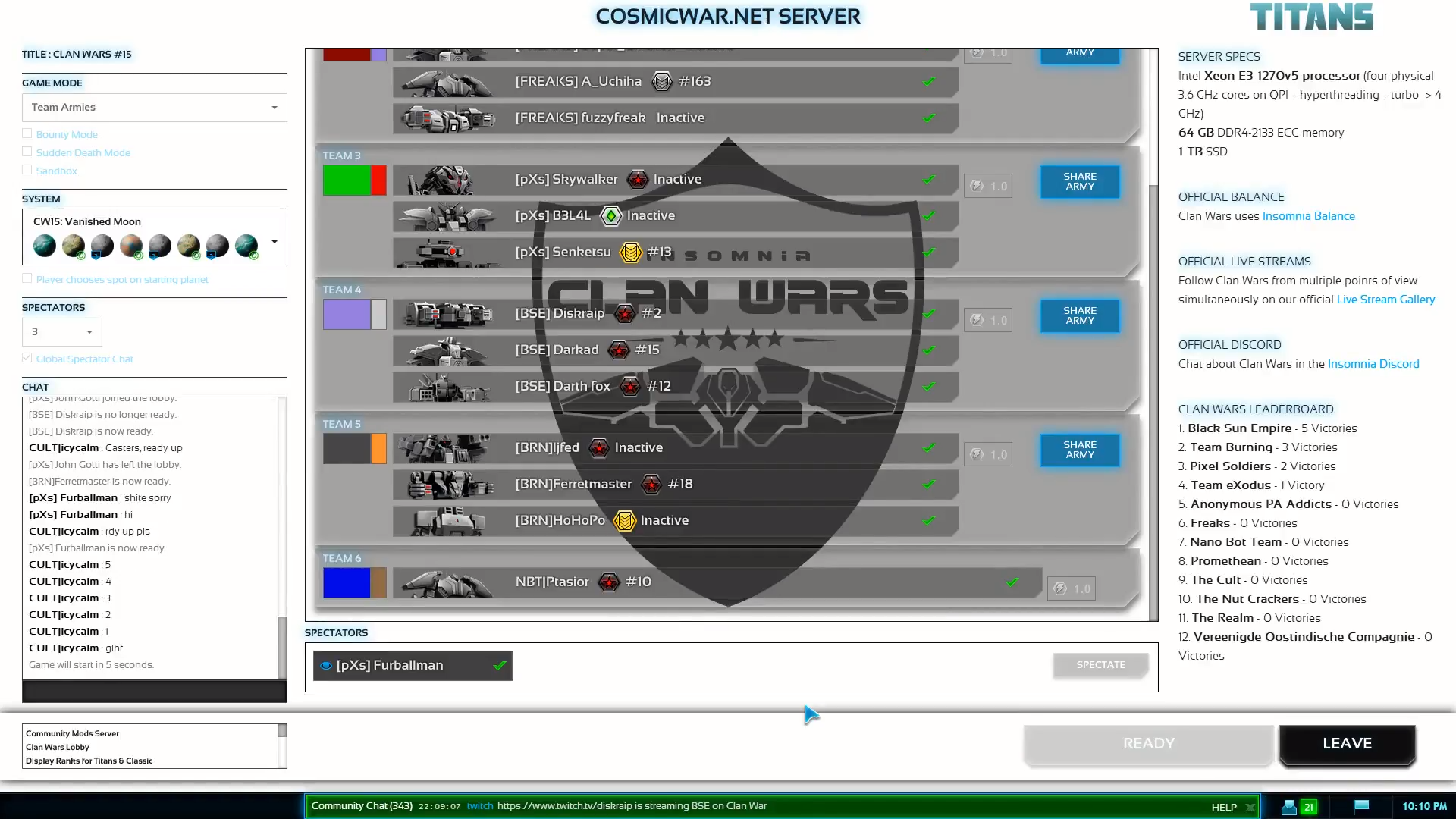 Because a Team of Strangers is no Team

The surprise resurrection of PA development has inspired quite a bit of discussion over at the official PA forum, and I've been taking part in it with several lengthy posts (on which I will elaborate here in the near future), but for starters I would like to talk a bit about the idea of a team matchmaker that people have been discussing for a while, in purely theoretical terms so far, but which suddenly became a real possibility, and whose proper analysis therefore has become urgent.
cdrkf perfectly summarizes the issue for us in the thread in which all the discussion is taking place [ > ], so I am going to quote him here in full, and then respond to him.

PA is better played in teams imo- what I would like to see over anything else is some form of team matchmaking (doesn't have to be a ladder). We already have player tracking / stats working in the background- use that information so that you can form balanced teams in team lobbies.
At the moment when you play custom games, they are usually hosted by small groups of experienced friends who then proceed to play game after game crushing the random mix of opponents they get who usually don't know each other and are of wildly varying skill. A team balance feature works well in spring, despite having a very small player base- and whilst the balance is seldom perfect (new players on the system will always be an unknown for example) it really does give much closer games. I really think this would help PA because on the occasions where I have managed to get into a balanced team match the game really shines.

I don't know if his proposed matchmaking system will benefit the game—perhaps it will—but if it yanks my friends from my team and replaces them with strangers, I will never use it. I am not interested in playing with strangers in my team. In fact a team of strangers is not a team at all, it's merely an abuse of the word, and the reason randoms lose so much is not because they are bad at the game, but because they are playing a team game against teams without being in an actual team. What they lack is COORDINATION, not enough stars in their badges next to their names, and all his matchmaking system will accomplish by tearing real teams apart is to make sure that NO ONE has coordination—which definitely solves the problem, but only by throwing the baby out with the bathwater, while the real solution would be to promote the creation of REAL teams via clan features that—instead of randomizing "teams"—go the opposite way and make these teams more concrete and longer-lasting. Because it is precisely by playing with the EXACT SAME people for a long time that a group of strangers gradually starts to become a real team, finally achieving the kind of superior coordination that can be leveraged against less coordinated teams to beat even groups of individually superior players. It was eye-opening how in my Clan Wars my team of Silvers repeatedly outlasted clans that were full of Ubers and Platinums. We didn't even have a single Gold player among us! (though now we have a Platinum, ex-Uber one, Diamond Dawg). That's what coordination can do. With a team of Golds I have no doubt I could have won half the Clan Wars.
And let's not confuse what happens in Counter-Strike or MOBAs—as Marshall did earlier in the thread—with how PA works. The less tactics and strategy in a game or genre, the less important coordination—and therefore TEAMS—are. My clan's superior coordination don't mean shit in a game in which coordination cannot be leveraged at all because there are no tactics or strategy possible in it; but the more tactical and strategic the game is, the more we can leverage our advantage. So in a 3v3 on a single planet, we'll get beat by superior players even if those players are not allowed to communicate at all, but in a 30v30 on a 10-planet system including gas giants and metal planets, I would demolish the 30 uncoordinated Ubers every single time even if my team consisted of 30 Silvers (and note that, for me, a highly skilled player who isn't part of a clan is still a random; this designation has nothing to do with skill, as far as I am concerned, but only with formal clan affiliation, or the lack of it). 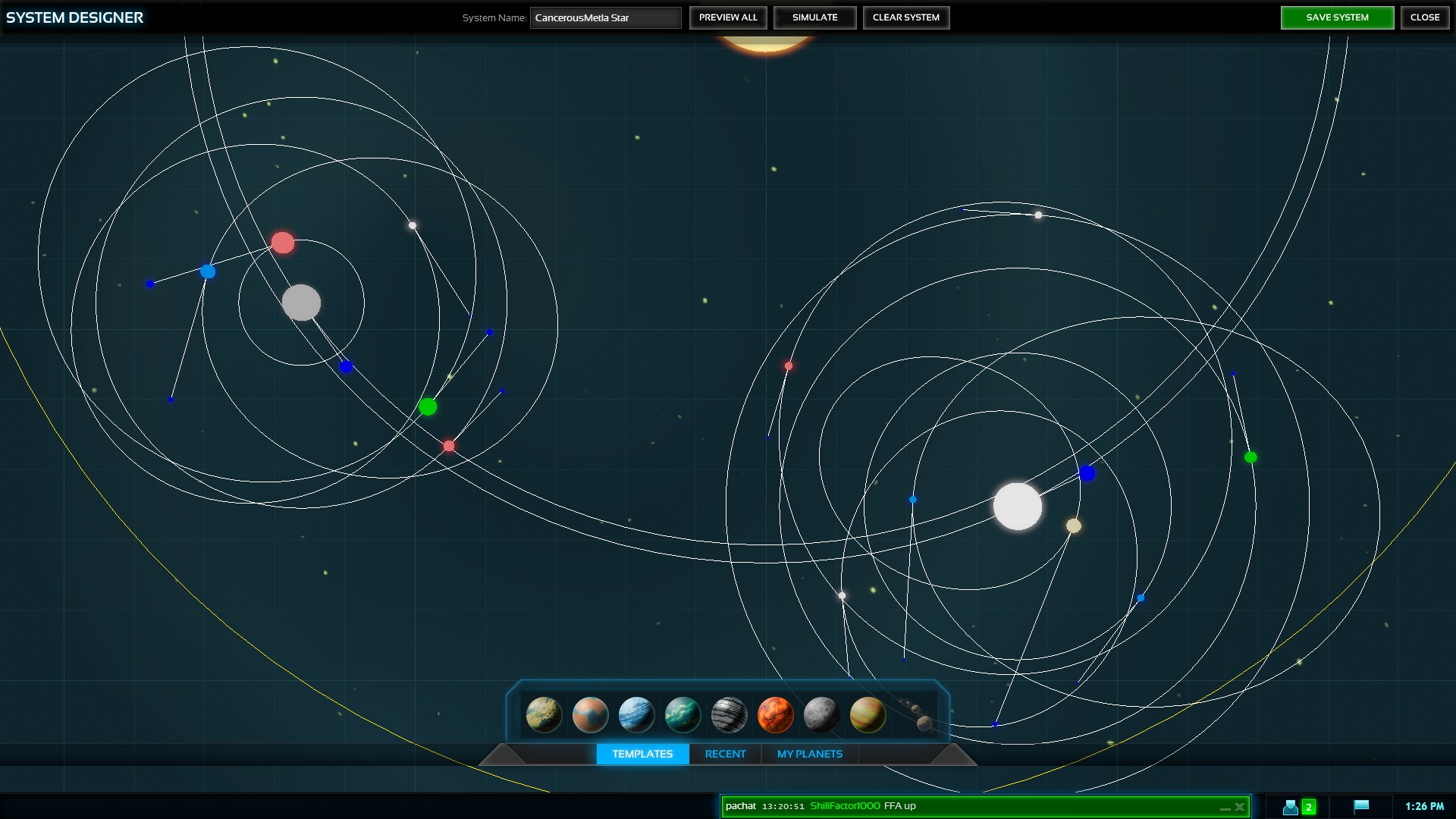 To get back to Counter-Strike and the MOBAs, the reason those games flourish despite the mass of their playerbase being randoms is because there is NO STRATEGY AT ALL in these games, and very little tactics. (And btw, because I know people have trouble grasping the difference between strategy and tactics, I made up a handy definition for everyone: tactics is what happens during a battle, and strategy is what happens BETWEEN battles). So a team matchmaker like cdrkf proposes works well there, since teamwork cannot be leveraged to a very high degree—at least not to the degree it can in a big PA lobby (though the pro teams are all real teams, of course, because at that level of competition every advantage counts, however small). But in PA's case where tactics depth is immense, and strategic depth is substantial (obviously nowhere near as deep as in Civilization or Europa Universalis, but certainly far deeper than in any other RTS ever, especially when played with lots of players on huge systems), proper teamwork can utterly demolish uncoordinated competition, who'll have no counter at all to the killer icycalm megabaseTM strategy. If the randoms appear stupid when they get crushed repeatedly by proper teams, it's not because they can't figure out how to play the game, but because they can't figure out how to join or start a real team in a fundamentally team-based game. How are they going to respond to an orbital rush to gas or metal? They are not going to respond at all, and the game will be boring and over very quickly—which is why I immediately jumped into Exodus' Clan Wars, when it was first announced, and why, when I returned to the game after Titans' release, I started my own clan-specific events to continue and expand on Exodus' legacy. These events promote EVEN CLOSER team integration and coordination, and that's why these events consistently produce the best games played in PA ever.
In sum, team matchmaking tears real teams apart, and is therefore not the way to promote the creation and growth of real teams. What we need—as I've been saying for years—is the new PA devs to add clan-specific features in the game, and to allow our custom servers to appear in the custom game lobby again so we can run weekly clan-specific events, which should be prominently advertised in the game's main menu. And then randoms will take notice, and more of them will decide they want in on the fun and join or create even more clans, and large team games will become far more frequent and exciting than they are today, and clans will flourish, and it will be amazing.
Of course, that doesn't mean that a team matchmaker would be entirely useless. I would personally not use it, and neither would any of my clan members (unless it somehow allowed our teams to stay intact, without rudely pushing strangers on us—which I guess would defeat its purpose?), but for those randoms who have once and for all COMMITTED to AVOIDING SOCIAL INTERACTION LIKE THE PLAGUE, I guess it would be useful in order to give them lobbies that don't produce games that ENTIRELY suck. So the scheme certainly has my approval and support, but I believe it should be made far lower priority than the clan features I am so fervently asking for. Until then,

See you on the battlefield,

Discuss this article in the Cosmic War forum.

Powered by Insomnia. All media are the property of their respective owners.